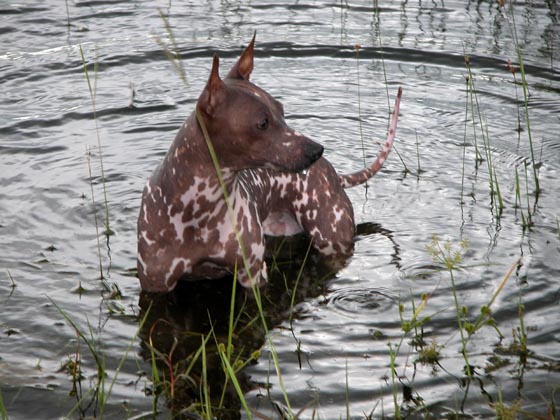 Taylor loved to play in our pond.

Taylor as an 8 week old

Taylor was born in Arizona but came to live with us at age 8 wks. She earned her UKC Champion title on March 8, 2003 and her Grand Champion title on November 30, 2003. She has numerous Terrier Group placements. She was also selected as “Covergirl” for the “Terrier Special Issue” of “Bloodlines Magazine.” 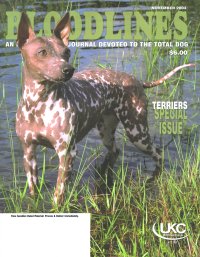 Performance Events: Taylor LOVED weight pull and is the only one of our dogs to have a CHAMPION Weight Pull title! Taylor also loves Terrier Racing, has the drive and determination, this old girl just doesn’t have the speed to beat the young ones on the track! But that doesn’t stop her from trying! Taylor was the first AHT to win a TOTAL DOG AWARD! On Oct 30-31, 2004, she earned qualifying pulls in Weight Pull and then on Oct 31, 2004, she won her GRCH class, BOB and won BEST IN MULTIBREED SHOW against some 22 breeds! WOOO HOOO! She ended 2004 tied for the #8 AHT in Top 10! 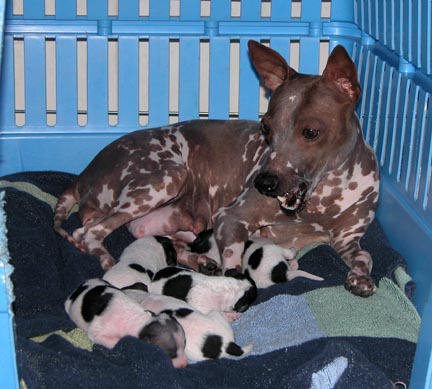 Taylor and her pups

Litter 1: Taylor passed all health clearances and was bred to Flinthill’s Red Robin (Robin). 5 girls were born on Sept 3, 2002. 2 of the girls were shown, with Sofie earning her CH conformation title. Ayrieanna earned her GRCH title and went on to be the first HAIRLESS RAT TERRIER to win Best In Multi-Breed show honors and she did it 2 times in 1 weekend (8/9 and 8/10/03). Max is living in NYC. Stormy lives in Canada and has actually sailed around the world!! Jaymie passed over the rainbow bridge on Jan 9, 2003. Her family misses her terribly.

Litter 2: Taylor was bred to CH Flinthill’s One Musketeer (Tagnon). Their 5 pups were born on January 6, 2004. Alyck lives in the Netherlands. Tessyn and Brackyn are also in pet homes, but in the US. Toggyl went on to earn his UFR USR UWP and GRCH titles. He ended 2006 AND 2007 as the #2 AHT in Top 10. In 2008, he was in the #8 spot. Toggyl has 2 Best In Show wins and 4 RBIMBS wins. He is also credited with the most specialty wins of any AHT. Saryn stayed with us – refer to her page for her accomplishments!

Litter 3: Taylor’s final litter. Taylor was bred to Wade’s RedNeck RabbleRouser (Rowdy) and 4 pups were born on Dec 3, 2005. All 4 pups were shown in conformation. 3 of the 4 earned Champion titles with limited showing and the 4th, Cytra, earned her GRCH title.

As of January 2013, Taylor was a strong, healthy girl despite being nearly 13 years old. She was truly the matriarch of our pack. She was a great squirrel chaser and bird hunter and taught this to our other dogs too!

Unfortunately, we lost Taylor in June 2014. I am sure she is running free over the Rainbow Bridge!!