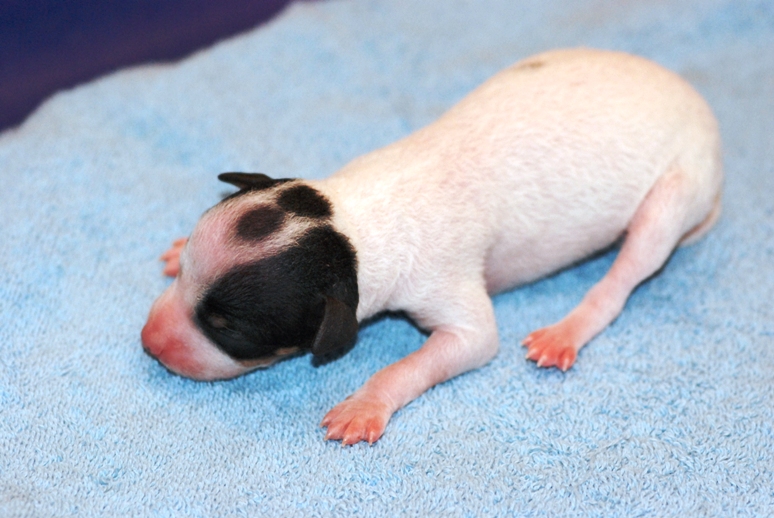 UACH UFCH USCH UWP GRCH Flinthill’s Something Wicked@WMK (Evyl) – Evyl was the winningest AHT in conformation history – She earned her CH title the first 3 shows she competed in and earned her GRCH title after the minimum required # of shows – 5.  She took most of the BOB classes and took the #1 spot on the Top 10 list immediately and did not fall from that spot all year. Evyl also has 6 BIS/BIMBS and 8 RBIS/RBIMBS with UKC AND she has 1 RBIS at an International show!!  Evyl ended 2005 as the #1 AHT in Top 10 by a landslide…no other AHT has ever earned that many points! She also ended 2006 in the  #1 spot …with limited showing 🙂 Evyl retired from conformation in 2007 but came back with a bang (and limited showing) in 2008 following the devastating tornado in GA. She ended 2008 in the #1 spot again.

Evyl earned her UWP title 9/18/05 in Charlotte, NC. Her conformation wins that weekend, GRCH/BOB/Grp 1 or 2/and RBIMBS coupled with her 3 qualifying Weight Pulls, earned her 3 Total Dog Awards that weekend!  Way to go Evyl!!!  Evyl earned both her United Flat Racer and United Steeple Racer titles and earned her United Agility Champion title in 7/2009. She went on to earn Champion racing titles as well. Click here to see photos of Evyl’s Wins

Evyl lost her sight April 27, 2012 and has had to learn to do everything again….while blind. She has adjusted well and is a great girl!! We are working on getting a title in Nose Works which is the only licensed sport blind dogs can compete in at this time.

CAX UAGI USGCH USGCH GRCH Flinthill’s Rum Runner@WMK (Rummy) – Rummy is a coated AHT who is built beautifully with movement to match. He is Aaron’s junior showmanship dog and has helped Aaron take top honors with some very stiff competition. Rummy took home his CH title on December 2, 2005 and his GRCH title soon followed: March 11, 2006. Rummy ended 2006 #4 in Top 10. Rummy went on to take TOP HONORS at Premier, June 2007, moving on to the semi-finals of Top 10!  All of this, handled by his boy, Aaron!! Rummy has also earned 1 Best In Show win, and 2 Reserve Best In Show honors.

Rum is also one fast doggie!!!! He has taken terrier racing by storm and quickly earned his United Flat and Steeple Racer titles. He has even beaten the fast Jack Russell at Premier in a “fun run” (back when people believed that the dog was not beatable). He earned his CH racing titles in 2008 and completed his GRCH racing titles too! Rummy was ranked #1 in Racing All Stars in both Flat and Steeples for his height division. At Premier in 2010, he took Fastest Overall in Flat Racing! Way to go Rum! Rum has continued to race and even at the age of 8 years, he continues to race and enjoy it!

He is also working on his CAX and earned his first agility title in April 2013.

UFR USR GRCH ‘PR’ Sarantais Mercy N Justice @ WMK (Perry) – Perry was imported from Finland in June 2009. He was born overseas at Kennel Sarantais with our dear friends Sari and Ari. His dam, CH WMK’s Have Mercy (Salli) was bred here at Woodland Manor Kennel and was 1 of the 3 original AHTs to find their way to homes in Finland. Salli went on to become the first Finnish UKC Champion of record when Sari and Ari flew her to the states on a visit and were able to earn her UKC CH title. We reached out to Sari after losing Salli’s dam, Camryn (our 2nd AHT), tragically following a cane toad (Bufo marinus) poisoning. Salli had just whelped her final litter and Sari graciously allowed us pick of the litter. Perry came to us here at Woodland Manor and fit right in. In this, Perry’s first full year in the show ring, he has done fantastically well. At present, he is the #2 ranked AHT in the country and most recently took home Best in Specialty Show honors while competing against the top AHTs in the country at UKC’s Premier Shows in Richmond, IN. Perry is also the #1 ranked AHT in ARBA and has earned multiple Best In Multi-Breed Show wins and Reserve Best In Multi-Breed Show wins in UKC along with several Best in Show wins in ARBA.

UWPCH GRCH ‘PR’ Wade’s Red Red Whine (Taylor)– Earned her UKC Champion title on March 8, 2003 and her Grand Champion title on November 30, 2003.  She has numerous Terrier Group placements.  She was also selected as “Covergirl” for the “Terrier Special Issue” of “Bloodlines Magazine.”  Taylor has had two litters to date (see above for the stats from those pups). She produced the first hairless Rat Terrier to earn Best In Show title.  Taylor competed in Weight Pull October 30-31, 2004 and earned qualifying pulls both times.   AND she went on to become the FIRST AHT to win a TOTAL DOG Award as she took her GRCH on Oct 31, 2004 and then BOB….and then she went on to win BEST IN MULTIBREED SHOW against some 22 breeds!  WOOO HOOO!  Taylor ended 2004 tied for the #8 AHT in Top 10!  Taylor has also gone on to complete her UWP title and then earned her Champion United Weight Pullers title too.  She has tried Terrier Racing and although she has the drive and determination, this old girl just doesn’t have the speed to beat the young ones on the track! But that doesn’t stop her from trying!

UWP GRCH WMK’s Enduring Freedom (Freedom)- Earned CH status on October 27, 2002 just before her first birthday.  She went on to become the first hairless Rat Terrier to earn the UKC title of Grand Champion on June 28, 2003. Freedom was the first AHT (not hairless Rat Terrier) to win Best In Multi-Breed Show on March 7, 2004, under honorable Judge, June Pasko.  Freedom has also earned several Terrier Group placements. Freedom lives with us and had her first litter of pups on January 18, 2004.  Freedom ended 2004 as the #6 AHT in Top 10.  Freedom was the first AHT to compete in Weight Pull.  On September 11 and 12, 2004, Freedom pulled her way to two qualifying legs towards her United Weight Puller’s Title.  She pulled 165 lbs the first time and 180 lbs the second day.  On October 30, 2004, Freedom became the FIRST AHT to earn a WP title!!  She is on her way to the Champion UWP title as well.  Freedom has started her terrier racing career as well but honestly doesn’t LOVE it…so it is doubtful she’ll earn her titles…oh well!  Freedom is also training for agility!!! Freedom is also the “star” of our logo!!

Saryn has produced some of the most beautiful puppies and has certainly left her mark on the breed!

CH WudNshu’s A Life Less Ordinary (Camryn)- Earned her UKC Champion title in the spring of 2005.  Camryn’s true mark has been in her offspring as she is a wonderful brood matron and has produced some terrific babies to date (see above). Camryn died in April 2008 following a poisonous toad encounter. She is deeply missed.

Wade’s Blue Moon Conyr (Conyr)- She was a pet…. a silly, wonderful, spayed pet who loved to play ball and lay all over you!  Although we couldn’t imagine life without our Conyr-ific, she died in April 2013 at the age of 14 years.  She is missed every day.