Fyji was the only coated pup in her litter

Fyji was born at our home and is one of our FOREVER family members. In her litter, she was the only coated pup. She was born first and as soon as we saw her, we knew she would stay. Fyji earned her GRCH conformation title when she was only 10 months old. She also took a Reserve Best In Multi-Breed show that weekend too! Fyji has gone on to earn additional RBIMBS and BIMBS honors over her show carrier. She ended 2010 as the #7 AHT in Top 10. It was always harder for Fyji to win, with her tipped ears and her “doggy” appearance. Everyone always thought she was a boy. We always thought her movement was to die for and were always thrilled when it was recognized!

Fyji began working on her AKC Certificate of Merit (CM) title in 2014 when AHTs moved into Miscellaneous. As of Dec 2014, she is more than half way there!

Terrier Racing: Fyji has races in the over 15″ height division. However, she actually measures just under this (we had some incorrect measurements early in her racing career so she has always raced in the taller division). Despite this, she has been a STAR! Fyji has both her Grand Champion Flat Racing title and her Grand Champion Steeple Racing title. Fyji has consistently been in All Stars and has taken top racing honors at Premier. She is ONE FAST FYJ! 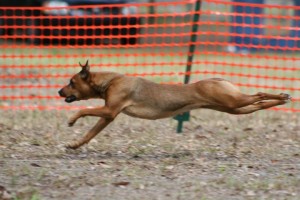 Weight Pull: We are training for Weight Pull activities.

Fyji laying in the leaves.

Pups: Fyji passed all health clearances at age 2 but has not yet been bred. Given that she is already 6 years old, it does not look like puppies are in her future.